No one will fault VIB for launching an Oktoberfest beer a tad early. Any new release after a quiet beer summer is greatly appreciated. VIB has talked big about seriously participating in the craft beer scene. We are starting to see it: bomber releases, growler fills, casks and rotating seasonals. While the styles chosen have not been overly adventurous (except for the Flying Tanker), each release has been solid and embraced by the beer masses. The Iron Plow marzen/Oktoberfest is no exception. This style is inherently drinkable yet overlooked by beer makers. Perhaps the stigma of oompha music, massive jugs of beer, bigger jugs in ladies' shirts and drinking in big tents has frightened off brewers. This is sad. The marzen should be available all year round, so that you can enjoy oompha music and pretzels in the privacy of your den. 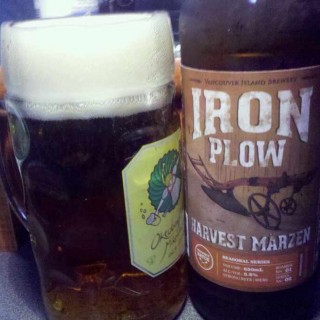 The nose predicts drinkability with few surprises. A long lingering, fluffy head emits an aromatic toasted cereal and an essence that can only be described as 'lager'. Sweetness is the first thing you notice; it is similar to chewing on a piece of toast for a long time. Its creaminess only perpetuates a chewy sweetness which the dry, herbal hops end abruptly. The linger is a little longer than expected, a tad sticky, but nothing out of sorts. This is not a palate challenger; the flavours are straight forward and enjoyable. An ideal food pairing would be anything roasted: pulled pork sandwich, veggie kabobs, bison burger with caramelized onions and smoked Gouda or prawns. Maybe a plate of hummus and pita or falafel burger. Just give me any whole wheat sandwich with cream cheese and I would be happy.

Most of my readers know I'm a sucker for packaging. They also know I have a fetish for beer glassware. This gift pack from Paulaner is a double WIN! That's right, for $12 you get a mas and a litre of beer. I picked this up at the BCLS at Fort and Foul.

The hardest thing about the

Oktoberfest/Marzens style is that aroma. I'm sure some connoisseur will state that it's the effects of lagering rich German malts. I still think it smells like lettuce and vomit. Luckily, Paulaner is light in the aroma department; just the standard lettuce and toast. This brew is very drinkable. Every gulp is medium and creamy with a smooth finish. As the style dictates it is very malt forward with only a hint of spicy and herbal hops to back it up. The malts are light and reminds one of honey, heavily chewed bread and straw. I liked it; sadly there were no pretzels around my house.

The nose was truly clean with a lightly bready and caramel nose. Usually I am not a fan of lagers, but this was tasty. The taste was just like the nose with a noticeable floral and earthy hops backing.

The ending was very clean, crisp and slighly effervescent. Maybe just a lingering kiss of roast and caramel.

This one was really nice.

This brew was enjoyed on my patio with a good buddy; he even bought the beer. I think he bought it because his name was Gordon also.

I will never look the same was at their cheesy restaurants again. This was a great Oktoberfest style beer: easy drinking with just enough caramel and hop goodness to provide palate love.

I must have gotten a dud beer, this one smelled awful. The nose was skunk (mild) and vegetables, but not too bad. My sips were somewhat pleasant with grasses, green apple, honey and a slight effervescence. It had a very pale taste and certainly easy to quaff back a few.

Not much there; it just vanished clean.

There was no hint of alcohol at all; no warmth either.

It was a very drinkable, but boring, beer.


Still in Seattle, but not loving this beer.

I know the Oktoberfest style is supposed to be a mild, drinkable beer, but this thing was bland. Maybe I did get a dud bottle; I dumped most of it down the drain. Life it too short to drink bad beer.

It has a nice caramel and lightly spicy nose. The taste is the same with a slight spicy hop up front and hints of green apple. A very drinkable brew due to the low carbonation. Since there is no picture you must imagine a copper and ruby coloured brew that you can just barely see through.

A very dry and tart finish, with a glycerin like coating of tart malt and green apples.

It was not stated, but assumed.

It was above average for any other brew. For Swan's it was OK, below average for them. This in a very unfair standard, but one should expect a lot from an excellent brewpub like Swan's.

No gaming tonight but I did have dinner at the Ferris's Oyster Bar upstairs lounge. Thanks Pfizer!

It was a tasty beer. It got lower marks because it was below average for Swan's. If it was from anywhere else it would get a 6/10

Red Stripe Lager
Stiegl-Goldbrau and is addiction really so bad?
Lucky Force 8 and 100th review
Posted by Unknown at 2:12 PM No comments:

This is marketing hype at its best. The label was cool, ABV set at 6.66% and it was released around Halloween. Hopefully the taste is good at the hype.

Shocking, the brew poured the colour of cheap horror movie blood red. There must be some beet juice in there. This is not going well, the nose is oddly vacant but barely pale malt. The taste is a vague hop soup with a vague malt blend carried on a medium-full mouthfeel. Too hard to pin down one particular flavour.

It was a slightly astringent tart finish but it was very vague.

It was not bad, but with the $5 I could have bought 3 Belgians. At least some of the money goes to charity.

This was the last beer of the night and I don't think I finished it.

It is great for the novelty and shock value, but don't buy it for the taste.
Posted by Unknown at 10:30 AM No comments: