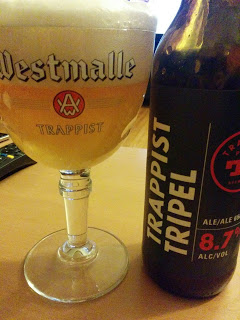 
So why did I stop blogging? It was certainly not due to lack of ego development.
There were three reasons.
1. I'm lazy. Or to use the fancier term: cognitive miser
2. Someone mentioned my posts were boring and repetitive. This person was perhaps correct. I won't name names. #$@# you Braeden. Love you, kiss kiss.
3. The last reason sounds incredibly pompous and arrogant, even for me. The enjoyment of craft beer was ruined by studying for the Master Cicerone exam. I spend almost one year studying and dissecting beers on a daily basis. I drank lots of beers. Not a lot one beer, but lots of different beers. It came to the point that the sip was not the path of enjoyment but an avenue for aroma and flavour analysis. The pop of a cork lacked enjoyment. This was only reinforced when I failed the exam. I got 68%, which was short of the required 85%. Looking back at my failing feedback, it faded the luster of the labels. Is the pinnacle of craft beer appreciation deciding if the levels of damascenone were suitable for this aged Scottish Ale? Perhaps this faded cherry flavour is not actually yeast derived but from barrel aging. Was this what beer geeks strive for; no thank you. So, I guess this blog is trying to recover my lost love of beer.
Posted by Unknown at 10:58 AM No comments:

It's back, a new blog and Lighthouse Ahtanum hop IPA

Did you think I would be gone forever? I did miss it, blogging that is. A lot of beer is still drank, but certainly a lot less. I've been enjoying a lot of blogs and podcasts.  There is a common theme to successful ones. They add value and are creative expressions.
So a new blog idea, something less preachy and pompous. It is OK to admit it, there were references to obscure Philippine citrus fruits in my IPA reviews. This one is going to be the "small beer geek blog". This is the premise: a $200 per month beer budget and only use/keep 10 glasses. In case you noticed, one of the podcasts followed is The Minimalists.

Weekly, I visit multiple beer stores and read about all the brewery beer releases on Facebook. One can't drink them all, nor would you want too.  The beer bottle labels and descriptions are no longer a flavour mystery. Recently someone asked me, "is the honeymoon phase of craft beer over?" Sadly it is. Think about it. Other than perhaps Sartori Harvest, which local beer release have you been excited about. There are still Sartoris on the shelf so I am not the only one feeling this way.

So here is it. Limited budget and must explain why I chose this beer to drink. Enough rambling, now into the beer choice.
This week I drank the Lighthouse Numbskull Ahtanum single hop. I like a single hop beer for the fun factor of picking out flavours in more complex IPAs. This is a great way to start. I might get the El Dorado version next. It is a solid IPA, decent malt backbone of caramel and bread. The hop flavours
were very linear and well under the undrinkably bitter mark. Ample piney and grapefruit aroma and flavour, but not too much bitterness. Sounds right for a lowish alpha hop aroma with over 50% myrcene oil content. Worth a taste. So that makes monthly budget at $191. What did you drink this week and why?
Posted by Unknown at 2:22 PM 1 comment: