Just a real quick review to keep my backlog from getting too long. Not much to say about this beer anyways, it is a pale ale in a tall can. 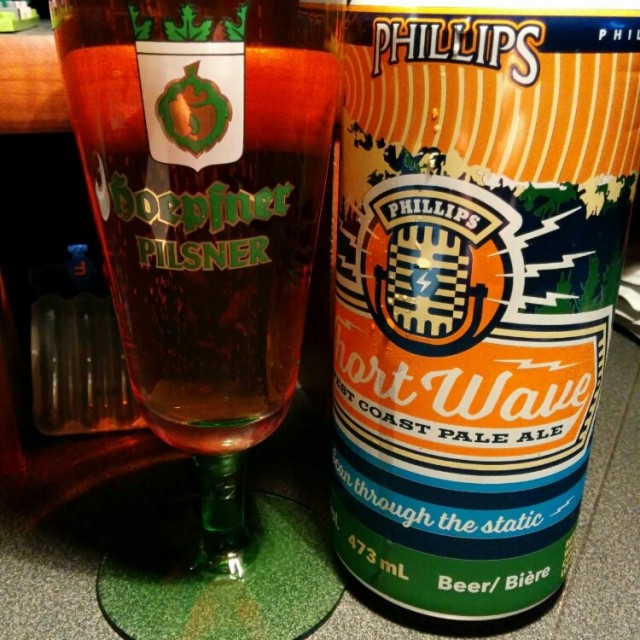 The nose started promisingly with a pronounced whiff of pine, cedar and bitter oranges. Sadly once this pleasant aroma dissipated there was a noticeable aroma of diacetyl. This was confirmed by the slick mouthfeel that was best described as medium to full. Building on the citrus, pine thing was the usual honey and biscuit malts. The Shortwave is a oddly sweet beer despite the initial hop bitter aroma. Overall, the best thing in a can for under 2 bucks. I think the description is aggressively popular.

Glassware: Right from the can is fine.

Food Pairings: Would go with anything, honest.

Cellar: Nope
Posted by Unknown at 9:31 PM No comments:

I was asked by a friend for my thoughts on the 2015 Canadian Brewing Awards. Let us break down the medals to prove that BC is the best place in Canada to drink craftbeer. Perhaps the perfect place start is with the brewery of the year, Four Winds Brewing in Delta. This brewery just celebrated it's second birthday with a very prestigious present. At this years CBA, they took home 5 medals from 14 entries (thank you Brent). This is a 36% success rate; most of my analysis of the CBA will feature this measurement. In turns of medal breakdown, BC breweries cleaned up. Of the possible 123 brewing medals, BC took home 45, Ontario 41 and Quebec racked up 23. As a percentage it reads BC 37%, Ontario 33% and Quebec 18%.
Macro breweries are allowed to enter this contest.  As a side note, macro breweries took home 11 medals or 9% of the total. I'm not sure who is and who is not considered a macro back east, so this is an estimate. Macros only scored higher than a craft brewery in 5 categories. Most of these were the ones you would expect: lagers, wheat ales, light lagers and cream ales. In comparison, Victoria breweries fared almost as well as the macros with 9 medals or 7%. In fact, Victoria received 23% of the medals won by BC breweries.
BC breweries also swept two entire categories: Black IPA and Red/Amber ales. Ontario also swept two: Wood/Barrel aged and Honey/Maple beers. This seems about right, we like our hoppy beers but do not get a lot of maple syrup on this coast.
At this point the comparisons between BC and Ontario breweries might seem pretty close. These next numbers pull BC to the front of the line. Of the 1097 total entries, BC submitted 336 and Ontario 408. While Ontario did enter more beers, BC had a higher percentage of winners based on entries. BC claimed medals 13.4% of the time, while Ontario only took the podium 10% of the time. To make BC appear more awesome, lets look at this based on our provinces population. In January 2014, BC had a population of 4.61 million and Ontario 13.6 million. This means that BC had a medal ratio of just under 1:100,000, while Ontario trailed far behind with 0.3:100,000. More great beer per capita! We will just ignore the fact the Ontario took home 15 golds and BC only 12. But BC did take claim the best IPA, which is the only category anyone cares about. Well done Russell Brewing. Apparently Mike really liked the Punch Bowl.
Now for some of the highlights and fails of the CBA 2015.
For highlights, many new BC breweries took home medals. Category 12 in Victoria took home gold in the BIPA category. Bad Tattoo in Penticton took home two silvers. Rossland Beer Company's 7 summit milk stout out classed last years beer of the year, the Sasquatch stout from Old Yale.
As for the fails, they all happened back east. Amsterdam Brewing entered the most beers, 29 in total. They only took home 2 medals. Mill Street entered 26 beers and took home nothing. Ouch. Even Canoe Club beat them and won a medal in the pilsner category.
Something I found interesting was that BC's favourite brewery, Driftwood, did not place a single entry. Also one of the largest brewery in BC, Phillips, only entered their top selling four beers. Too bad, Blue Buck Pale Ale did very well in the 2012 lager category .
If you have any highlights or thoughts about this years CBA, leave a comment below. Or you can leave a comment if you think my math is wrong.
Posted by Unknown at 10:29 PM 8 comments:

Two things to mention in the post. The first is rather shocking. As everyone knows, last weekend was the Canadian Brewing Awards and BC Breweries cleaned up. Beer Me BC has a nice write up on his blog. What was shocking was that the most notable BC Brewery not to enter any beers was Driftwood. Nope, not a single entry. I wonder if they did not enter in 2014 either? Phillips just sent in their four best sellers. Too bad, apparently Blue Buck Pale Ale was a silver metal winner in the lager category in 2012.
The second item to mention was the inability to satisfy of my pompous palate. This is neither new nor exciting. Like a good Victoria beer drinker, I rushed out to buy the 2015 Driftwood sour release. Money was blindly placed on the counter and this coveted bottle was rushed home to chill. The idea temperature was reached and the favourite glass was used. After being thoroughly cleaned of course, lest I be scorned by a certain penny farthing rider. I sipped, I tasted, I tasted again and I was saddened. Don't get me wrong, this beer was delicious. I was just not stupefied. When the first Driftwood sour came out, I was blown away. The flavours were so unlike those the Victoria craft beer drinkers have every tasted. This years sour tastes very similar to last years. Perhaps the desire to search out new flavours and fermented imbibing experiences has cost me the ability to just enjoy a beer. The contents of my recycling bin has been looking rather empty lately. Is this why big breweries never market, or listen, to beer geeks/snobs? We, or maybe just I, never drink the same beer twice and whine whenever I do. This seems like a good time to shut my mouth, figuratively, and review this beer. 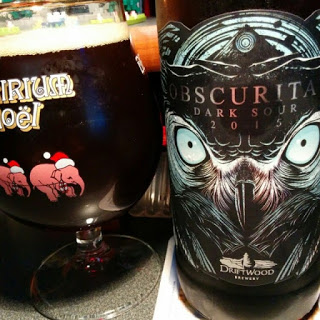 This beer hits all the marks that a good sour should. The nose is a ponderous mix of sweet and sour. Dark candy sugar and balsamic raspberry vinaigrette are the dominating aromas. Your teeth grind from the gripping acidity and your tongue screams from the sourness. It is hard to sort out the flavours, sour bing cherries, little wood smoke and molasses taffy. The ending coats everything and leave a long and pleasant sourness.

Food Pairings: Pairing with sours is hard, so I'm not going to bother this time

Cellar: Most certainly.
Posted by Unknown at 11:01 AM No comments:

It is not often that I read scientific journals. But when I do, it is the latest issue of Neuropsychopharmacology. I thought this was a very unfair study, it targeted two associated things: men and drinking beer. Of course there will be an association. Now I am again rambling, let's hear the science.
We drink beer for two reasons, or three if you have Untappd. The first reason is for the delicious flavours. The second is to trigger dopamine release from the striatum part of your brain. For those of you, like me, who slept through this class in school, dopamine is the classic reward neurotransmitter.  Nicotine, cocaine and alcohol all have positive effects on the dopamine systems of the brain. You drink beer, alcohol causes release of dopamine and you feel good. Sounds right to me. That and a social media badge and life is good.
Researchers at the University of Indiana set out to determine if just the flavour of beer could illicit a dopamine response without the alcohol component. On a side note, I think there are way more breweries in BC than Indiana. Indiana has about 20, BC about a whole lot more.
Anyways, a bunch of right handed beer drinkers were hooked up to a fancy brain scan machine that could monitor dopamine activity in their striatum. Why right handed? Left handed people tend to respond to brain studies differently. But this is another article. Back on topic, these poor subjects were hooked up to yet another machine that sprayed stuff directly on their tongues. Oddly when water or Gatoraid was sprayed on the tongue, no dopamine release was noticed. However, when beer was sprayed on the tongue, or tasted, there was a noticeable dopamine release. Also of interest was that if there was a familiar risk of alcoholism, the dopamine release was increased.
This study concluded that reward is a conditioned response that can be triggered by flavours and not the pharmacological effects of alcohol. Just tasting beer makes us want to drink more. Also if you have a genetic or family risk of alcoholism, your dopamine release is heightened. They should add another wing to this study to see if dopamine release is further enhanced when a new badge is gained on Untappd.
Posted by Unknown at 11:25 AM No comments:

Honestly these kids can do no wrong. Right on the heels of their Insubordinate session IPA, we have another tasty beer. This time it is a truly summer release, a witbier. For those of you, like me, who are into beer styles a witbier ticks the BJCP 16A style box. I'm still going with the 2008 version. Most witbiers are clones or slight variants of the definitive style Hoegaarden. There are few things better than a fresh Hoegaarden on a warm day, no orange slice for me thank you. This style has a few essential flavour components. It should be sweet, but not excessive. There should be some tartness from the wheat malt and aromatic yeast. It should contain some subtle spiciness and citrus notes. The classic choices are coriander and orange peel. The Waveform hits most of these points, with a major twist. 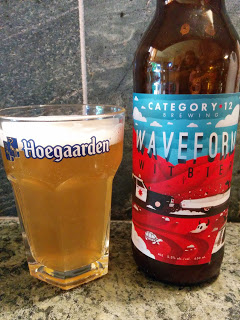 The Waveform starts off filling out most of the witbier checkboxes: aromatic wheat, vague spiciness and citrus. But very quickly things go awry. The wheat aroma and flavour is a little mushy, but this is easily overlooked. Do I taste fresh grapefruit flesh that is not hop derived? Who replaced coriander with warming cardamom? I need to reacquaint myself with this spice. Notes of brown bananas fills out the flavour package just nicely. A tasty twist of a classic style.

Glassware: A wit must be served in a heavy, hexagonal jam jar. So long as it is clean. If there is an orange slice floating in it, either fling it away or eat it. The only floaties I want in my beer are undissolved proteins or yeast flakes.

Food Pairings: Only seafood will do. I shall drink one of these with my next sushi order. Right after I have a spicy arugula salad with fresh goat cheese and capers

Cellar: Only if your cellar is on the patio and it is removed once cold.
Posted by Unknown at 10:34 AM No comments: