I'm a pensive fanboy for style combinations. At times the blending of brewing techniques can yield new flavours. Or it can go wrong and raise the question, "How do I spit out this mouthful of beer in a crowded bar?" Luckily this bottle by Phillips hits the former category. This tees up a stronger dark malt base (dunkel?) and allows a saison yeast to dive in an do its thing. Will spicy phenolics mesh with a rich, dark fruity malt canvas? I'm sure others will disagree with my thoughts. 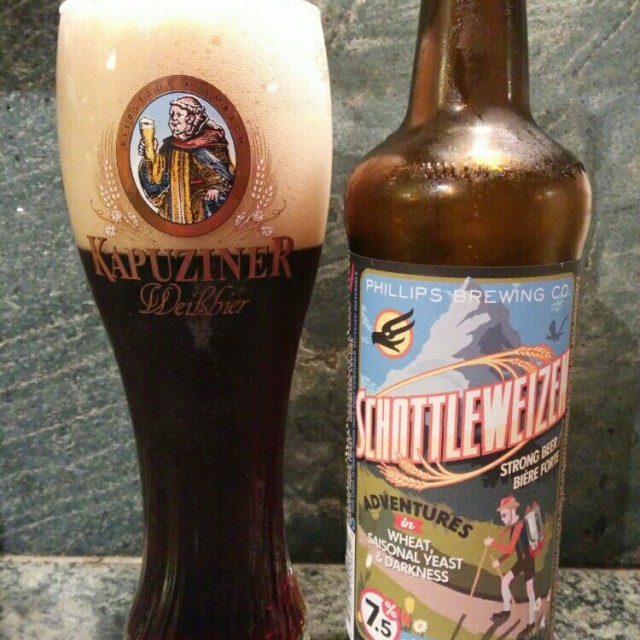 From the start, the spicy phenolics dominate the nose. There might be a little dark bread if you dip your nose into the foam. Each chewy mouthful supplies something new. The Schottleweizen is all over the map with flavours of dark breads, chocolate, prunes, bananas esters intertwined with a spicy saison yeast. It fades just as it starts. Perhaps a little unfocused but still very tasty.

Glassware: Definitely need a weisse glass to accommodate the massive head on this beer.

Food Pairings:Something dark and spicy will work well here. Chicken mole or Jamaican jerk might be in order. What cheese, what cheese? Let's be bold and pair this with a roquefort. If you like desert, try this with flamed bananas with a cinnamon rum glaze.

Cellar: Nope. Most of the flavours are yeast dependent and should fade quickly.
Posted by Unknown at 3:02 PM No comments:

Some days you just want to be alone. The desire to unplug from the metrics of the daily grind can, at times,  seem hopeless. How many IBU's is this IPA? How is your hockey pool doing? How full is your PVR? Numbers, metrics, grades.. Sometimes all one desires is a simple, uncomplicated experience. This is why I picked up the Strath 100 from Lighthouse. I hoped for a simple beer. After all, it was intended for the masses of 20-somethings that consume volumes of whatever is on special. Certainly this would be a linear beer that I could review and ignore. DAMMIT.
This is a tasty beer of furtive duality. At first sip, or gulp, it seems like any other 5% pale ale. Slightly citrus and floral with a calm bready/sweet malt backbone. For most people, this is where the story ends. However, it is easy to overlook a first for Victorian and possibly North American beer drinkers. This beer uses a new breed of hop called Vic Secret. Think of this hop as a toned down Galaxy. The citrus flavours are not the ones we are used to tasting. Sensations of pineapple and tropical fruit can be noted. A stealthy infiltration of unusual hop flavours into the Victoria collective palate. One might think of this a covert, Australian plot to get Victorian beer drinkers hooked on southern tier hop flavours. I'm OK with that. 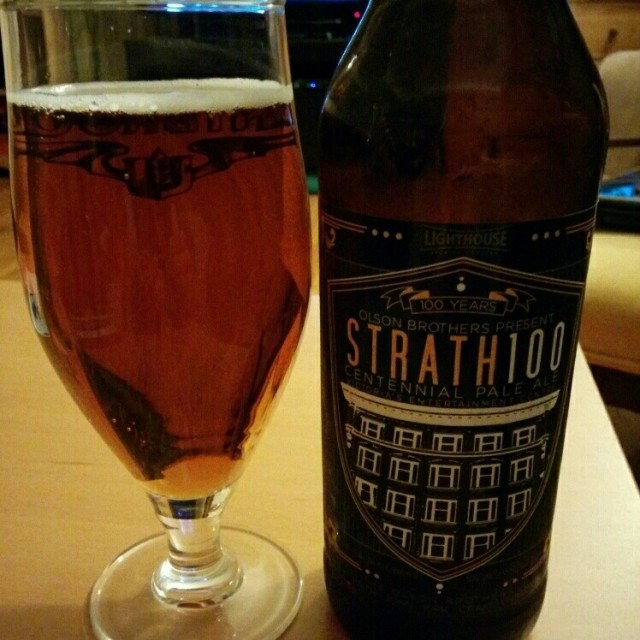 I kinda gave away the flavours in the preamble. 100's nose is calmly fruity of all things tropical (pineapple, mango). The unassuming medium to full mouthfeel can easily be overlooked. Yes, this beer contains the required citrus and bready flavours of a PNW pale ale. Tropical are the citrus in question. Hops dominate with pineapple, tropical fruit salad and earthy resins. A great mix for the ashy and bready malts. It all fades clean away. Well done.

Glassware:Whatever you have will do

Food Pairings: Anything will work with this beer. I'm thinking BBQ (veggie) burger action on the patio. Might even work with a quality grilled cheddar cheese sandwich.

Cellar: Nope
Posted by Unknown at 2:23 PM No comments: 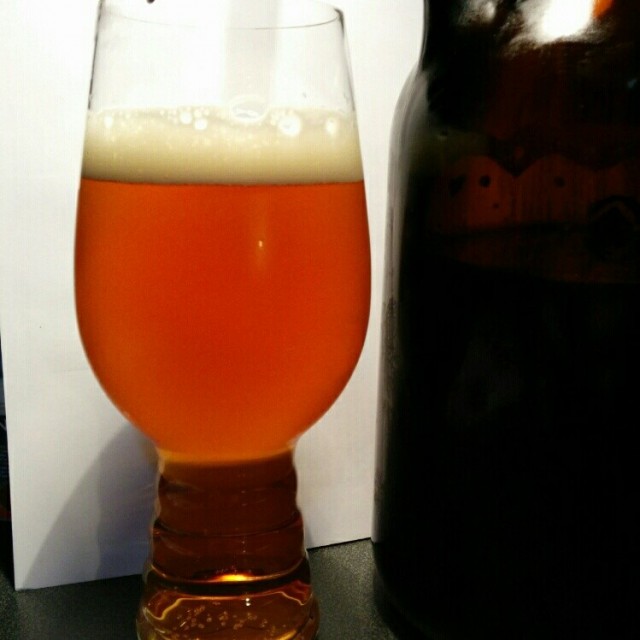 This author discloses that he received a complimentary growler fill. Thanks Kendrew and Rob. If this beer was not up to standards I would still report as such. But it is dang tasty, even though it is not sessional. VOTE WEST COAST COMMON.
Posted by Unknown at 12:02 AM No comments:

I have been a little lazy with beer reviews. Luckily there have not been too many. Other good beers this week include the Lighthouse Strath 100 and Phillips Barrel Aged Rauch.
This is the latest beer release by Spinnakers. Did have one little peeve with my experience at Spinnakers. I brought my growler in for a fill of the Irish Stout. It was on the draft list, but not on the growler fill list so the nice lady behind the counter said I couldn't get any. If only she mentioned that I had to walk upstairs to get my fill of Irish Stout, I would have been a happy blogger. This was partially my fault, because it is mentioned in the email newsletter Spinnakers sends out. I always forget to read the fine print. Anyways back to the beer.
We need more rye in beer.  It adds a great dry, grainy and spicy character. This ingredient is also helpful in head formation. Rye is unfairly considered an adjunct in brewing, just like corn, sugar, caramel, potatoes and spices. Basically if it is not malted barley, it is considered an adjunct. Which I think is unfair. Imagine lumping rye and oats together with corn syrup? Let's instead call it a superawesome unappreciated brewing grain, or SUBG for brevity. Enough ranting, how was the beer? 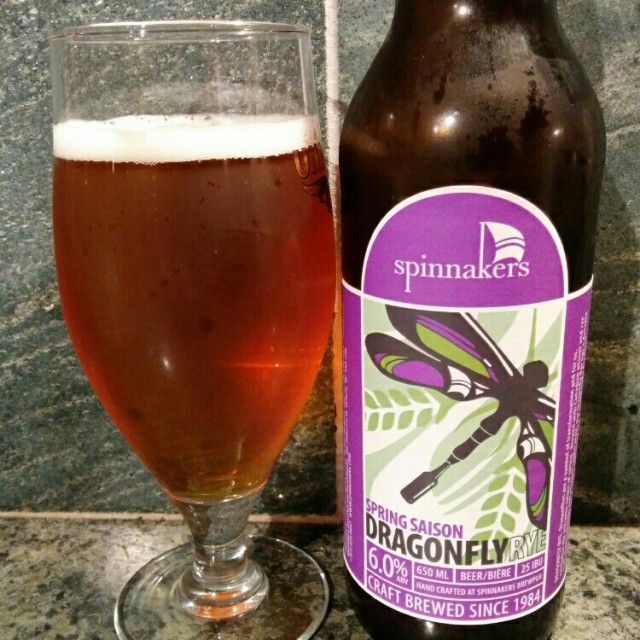 The initial aroma announces rye with its characteristic grainy and spicy scent. This blended nicely with the spices from the saison yeast. Each sip is creamy with that rye spice, slightly juicy with minor earthy hops. The rye does dominate the flavour but doesn't overpower. It brings out the flight fruitiness and lingers just longer enough. Very nice.

Food Pairings: This would be nice with Thai food. The spicy characters would blend nicely. A nice Welsh rarebit with rye bread and sharp cheddar would resonate with saison's flavours.

Cellar: Nope, drink it fresh
Posted by Unknown at 11:06 AM No comments: