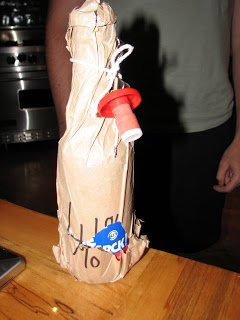 n BC
brought a Sink the Bismarck by BrewDog.

The format for this dinner was a little different; we did it potluck style. I prepared a loose menu and guests were required to bring certain dishes or the paired beers. Suggestions such as, "bring olives and pickles" or "bring an IPA" were well received and followed to the letter. As for the venue, a big thanks goes out to Rod Phillips from Liquor Plus for allowing us to use his beautiful tasting/cooking room. It was truly a stunning venue.

Now on to the food.


The welcoming beer was Mill Street's Organic lager. This was an excellent choice; the flavour was light, bright and not overly taxing on the palate.

The first pairing was Bruchetta and a Vienna style lager. The maltiness of the Brooklyn Lager mixed well with the acidity and sweetness from the tomatoes.

For dish two, olives and pickles were paired with a Saison. This was the surprising hit pairing of the night. The yeasty spiciness of the Driftwood Farmhand Ale balanced out the fat and saltiness of the olives. If the olives were spicier it would have been even better. 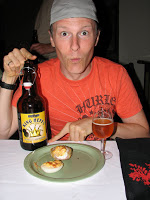 
A good IPA can be paired with anything, even breakfast cereal. In this case, we took Phillips Amnesiac IPA and let it do battle with Mrs. Left4beer's phyllo mini-pizzas. The pizza toppings included caramelized onion, portabello mushrooms and camembert cheese. The sweet and rich pizzas were no match for the caramel and imposing citrus hop bomb that is the Amnesiac double IPA. The two gastronomic menaces blended fabulously.

The final pairing was the uber hopp

Thank to everyone that attended; it was a good night. Nothing pairs better with good foods and beers than good friends.