Beer Allergy?? Maybe it is the Adjuncts. 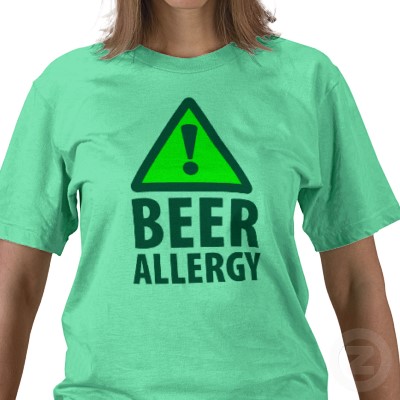 At first, one might think this is a sad story. Can someone actually be allergic to beer? Luckily, it has a happy ending. This tale of woe, comes to us from the journal Allergy. A sad man reported shortness of breath and skin rashes after drinking beer. At first, it sounds like an allergy to everyone's favourite fermented beverage. A man's dreams of Oktoberfest debauchery might evaporate like the Angel's share. Luckily a team of researchers at the Allergy Unit of the Faenza Hospital, in Italy took pity on this man and went all CSI on his immune system. Allergies to cereal products (i.e. beer) might be due to a nonspecific lipid transfer protein (LTP). With the vast variety of cereals used to make beer, the researchers proposed that only one kind of cereal might contain a LTP responsible for this allergy. This brave - allergic - soul was subject to a vast number of reaction inducing skin puncture tests. His skin was violated with all sorts of beer related allergens and 36 different commercial beer samples. The list of beers used was extensive, and included: Duvel, Chimay, Leffe, Bud, Franziskaner and Judas. Oddly he was not allergic to yeast, hops, rice, barley, wheat nor six styles of beer. However an allergy to maize extract was noted. Maize grits are a common flavour adjunct used in certain beer styles. The patient said that he had no issues with eating polenta and pop corn. The researchers speculated that brewing the maize, it's interaction with hops and alcohol might cause it to become an allergen.
What about the good news? The subject was permitted to drink the six, non allergic beers at home. He did not report any further reactions. Five of these beers were lame Euro lagers but the sixth has Hoegaarden. The researchers ended their report by stating that an extensive diagnostic workup can, "certainly improve the quality of life of the allergic patient." This is good science! Beer drinking certainly improves my quality of life.
Posted by Unknown at 10:54 AM