End of the year is coming up so I need to get these last reviews written before the top beer of 2013 posting. Everyone knows I rarely drink the same beer twice. I had actually planned to pick up a few Old Cellar Dwellers (OCD) to age - like I do every year. This year someone mentioned the recipe had changed. Normally the OCD's of the past have been almost undrinkable for at least 18 months or longer. This years version is enjoyably drinkable right away. In 2012/2013 the best barley wine was Swan's Legacy Ale; it was potent but yet drinkable. Phillips Drainwreck tasted like any other IPA and
the OCD was painfully hop-harsh. I could not find any Trainwreck this year, but there is still lots of OCD to be found. Perhaps this was caused by the price point: Trainwreck was $7 and OCD was $12. 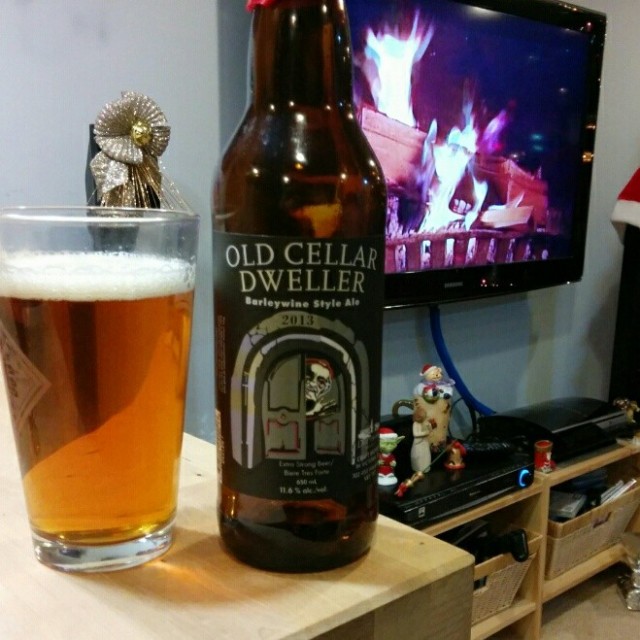 The first difference was the faint nose of clean vodka with biscuits and citrus oils. Yes, the hop presence was tongue tingling but not painful. A resinous and citrus hop blast was not strong enough to hide the honey and luscious biscuit malt backbone. The hops left a medium linger of oranges, pine, spruce, spices and geraniums. All the flavours faded a little too quickly than expected. From the alcohol warmth, the ABV of 11.6% might be pretty close.

Cellar: I'm not going to make any friends here and say this beer is not cellarable. The malt base is not complex enough and the hops don't need to be calmed with age. Might buy only one extra.
Posted by Unknown at 11:33 PM

I was going to pick up some more bottles to cellar, but based on your comments, I think I will only pick up one to try my first cellaring experiment. Thanks for the tip Ian.

It's a great beer, but I only plan to age 1-2. The OCDs of the past have beer great aging beers