For some unknown reason, I decided to visit VIB today. I heard an empty growler in the trunk and had 30 minutes before violin practice pickup, so growler run it is. The closest place was VIB, Phillips or Moon. Being a beer ticker, I had to try something new. VIB had the red pilsner on tap, which I thought was a new beer. More on that later; don't worry, there is a happy ending. The label on the tap said "Storm Watcher Red Pilsner", didn't VIB already have a beer called Storm Watcher? And what really is a Red Pilsner? Neither BJCP nor Brewers Association has a red pilsner in the guidelines. Perhaps it is a Vienna lager, International Amber lager or an Altbier. This red pils might fit into these categories. Or perhaps, this is just a winter lager? Dang it, is this another VIB recycled beer recipe? Sure tastes like it. I actually plan to cut and paste an old review, because the flavour is similar. Luckily they had 2016 Hermannator and a new IPA called Highway 19. The Highway 19 is your standard IPA dry hopped with Mosiac, at least that is what the nice lady behind the counter told me. She seems very confident and believable. I got a sample also; SPOILER ALERT, it's good. 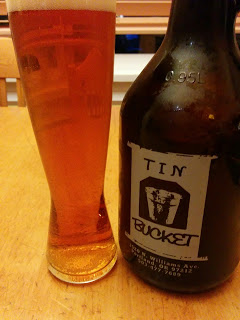 This ruby red brew is nice to look at, even though there is no foamy head. Despite the lack of head, it still offers up hints of vanilla and caramel with slight spicy hop presence. A cool creaminess delivers lots of malts - think graham crackers, caramel and raisins. There is also a continuous presence of vanilla that is not overpowering. The ending is sweet, quenching and ever so slightly astringent.  The storm watcher will appeal to beer drinkers who like their brews on the sweet side.

Food Pairings: This would pair perfectly with an unsmoked ham and cheese sandwich on rye. Perhaps a caramelized onion and mushroom cream sauce over buckwheat noodles. Maybe a desert of sticky toffee pudding would accentuate this lagers sweetness. Come to think of it, the Storm Watcher could be used to make a hot toddy.