Racer 5 IPA and The Bailout

Flavius: I'm headed to Washington to get some of that bailout money.
Meterman: Don't you mean bail money? Why should the US government give you money?
F: I am just like the little three automakers only smaller. I have an overpaid CEO (my wife), a greedy labour force (my kids) and my end product sucks (my blog).
M: That's right. If you declare bankruptcy, I won't get the $100 you owe me.
F: True. Also the video store, grocery store, liquor store and my psychiatrist will loose a significant amount of revenue.
M: The similarities are spooky. What do you plan to do with your money?
F: Buy a Nissan GT-R. 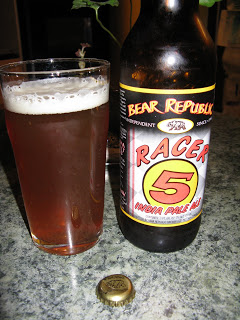 This was another requested review by a shire reader. Usually I am not a fan on IPA's, too much hops.

The nose is straight up phenolic hops. The taste is just like the smell but more. Hops is the dominant taste, but there are also pine, raisins and prunes. There is only the slightest of bitterness; slightly less than grapefruit juice. Underlining the whole taste package is some malt, raisin and prune sweetness. There was no head or carbonation to speak of.

Usually strong IPA's leave this nasty hops coating that you must floss away. This has none of that; just a nice hop residue that coats the mouth. It feels almost silky.

Just the right amount to add a bit of bite to the hop flavour.

It was above average price; I think about $6 for 650ml. But that is the price you pay for an import craft beer.

Just like the beer there was good balance. I watched James Wade and Dennis Priestly go 30 rounds in the 2007 Matchplay; very tense game. Then Meterman and I finished expert level on harvest; died in the rescue truck. It doesn't get any closer than that.

This is one of the few IPA's I would get again. Not at all like other IPA's; a very good balance of hoppy bitterness and malt sweetness. Racer 5 should not be your first IPA, they take a little time to get used to.
Posted by Unknown at 1:40 PM No comments: