Beer and Wine Can Help Heart Disease and Cancer 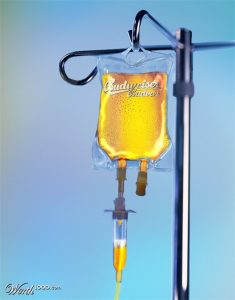 Well, this is a great news. Beer can help fight heart disease and cancer. According to an article in the online journal Nutrients, beer can do just that. Wine has better evidence for disease prevention when compared to beer. Most likely due to its higher concentration of antioxidants (polyphenols). About 30% of the antioxidants in beer come from hops while the other 70-80% come from the malts. This is another good reason to drink darker beer: more antioxidants.

There are multiple ways that moderate alcohol consumption can lower the risk of cardiovascular disease. Moderate imbibing can act as a mild anti-coagulant (blood thinner), increase good cholesterol (HDL), and increase your body's sensitivity to insulin (reduce risk of diabetes). This blood thinning effect of alcohol is interesting. In one study, moderate alcohol intake with dinner was able to thin the blood throughout the night. This is thought to be responsible for reducing the risk of early morning cardiovascular events (heart attacks and strokes).

The evidence associated with alcohol consumption and cancer is complicated. The World Health Organization considers ethanol to be carcinogenic (cancer causing). However there is evidence to suggest that beer (and wine) can help to prevent certain types of cancer. Xanthohumol is the most studied compound in hops that can help prevent cancer. It acts as an antioxidant, promotes formation of enzymes responsible for detoxifying carcinogens and can prevent the early growth of cancerous tumors. So far, this cancer fighting evidence has only happened in a laboratory petri dish. Melanoids in beer, amino acid and sugar combinations formed during the Maillard reaction, are thought to be anticancer, antibacterial and can help promote growth of healthy intestinal bacteria. The authors mention one Canadian study that demonstrated moderate protection from prostate cancer in men who drank beer.

There is much more research to be done. Beer and wine are rich with various antioxidants and cancer fighting compounds. However, which one of these compounds is responsible? Do they work synergistically (better together)? This is complicated by the fact that many of these compounds are not well absorbed by the stomach. I personally vow to dedicated by body to (non-invasive) science and drink a lot of craft beer. This is purely for the benefit of future generations.

Awesome news! :D Haha I was just "diagnosed" with having a vitamin D deficiency. I should drink more beer! ;)

As long as your do it in moderation and in sunlight