A long time has passed since drinking a Phillips beer. Perhaps it is my pompous beer persona that has stopped me from drinking Victoria's most popular brewery's offerings. 'Perhaps' is not the right word.. 'certainly' seems more appropriate. The Amnesiac caught my eye and spoke to me. After standing in line - behind a guy with an armful of Corona light - I bought my beer and cycled home. How can they brew a Corona light? I hope that guy buys a lime, because he might mistake his beer for bottled water.
My current beer selection seems to take a back seat to the two current IPA showdown contenders: Fat Tug and Switchback. These two newcomers have shadowed Amnesiac's trend setting appearance. Certain Victoria beers drinkers have lamented about this Phillips product being hoppier in the past. I think the hoppy measuring stick has just been raised over the years. 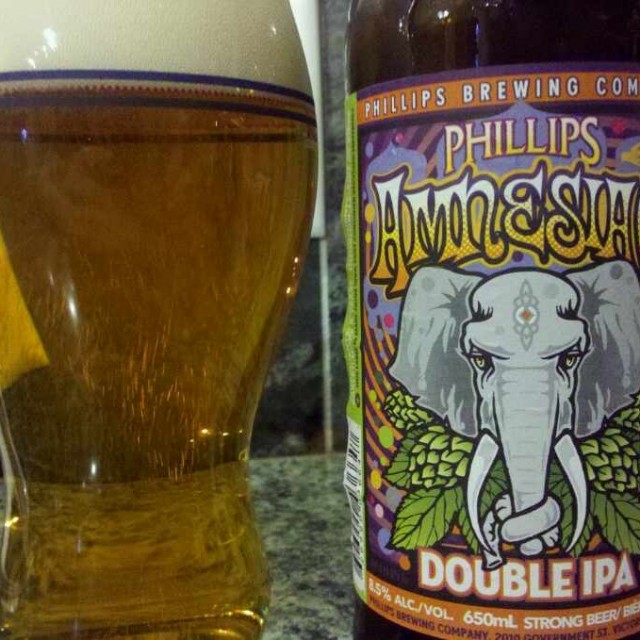 The nose is like walking through a Christmas tree sales lots; fresh cut pine smells are everywhere. Trees yield to a creamy tingle of resin, tangerines and Five Alive juice. Amnesiac is a frighteningly easy drinking beer for 8.5% ABV. After the sip you are left with a long, and slightly astringent, memory of tangerine marmalade on whole wheat toast. I should make my tasting reviews longer; hiding my thesaurus might help.

Funny - I felt the same way about this beer when I had it the other day. It used to be my go-to IPA a few years back. I had remembered that it didn't seem to be as good anymore. But the label change made me grab one and I have to agree that it is a great beer.

I had one recently and found the presence of DMS distracting from the pure hop experience I was expecting.

DMS, ya some of Phillips stuff can do that (Analogue). This is still a solid IPA. Not at the same level of Fat Tug or Switchback, but still nice.

Have you tried Lone Wolf by Fernie Brewing? It's quite good. Switchback is my current favorite, but Lone Wolf definitely in my top 5 for BC.

It was OK. Try Nasty Habit or Sergeants IPA