Does Beer Cause Metabolic Syndrome? 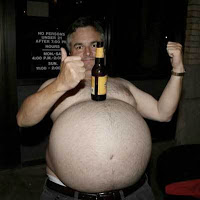 Metabolic syndrome is a group of health problems that raise your risk of developing all sorts of diseases, such as heart disease, stoke and diabetes. A few years ago metabolic syndrome (MS) was called syndrome X; I think the new name is much more inviting. If you box a trifecta in this horse race, things don't end well. For those who don't bet the ponies, this means if you have three of these risk factors your chances of developing health problems increases significantly.There are five metabolic risk factors associated with MS: abdominal obesity, high triglycerides, low HDL (good) cholesterol, high blood pressure and high fasting blood sugar.

So what does this have to do with beer? Researchers at the University of Navarra, Spain, looked into whether beer can increase your risk of developing MS. The researchers studied the diets of approximately 8000 graduates over 8 years. They were looking to see if beer, wine or spirits consumption contributed to the development of MS. What they found was that people who drank more than 7 drinks a week had a greater risk of developing MS than abstainers. A drink was considered to be 330ml of beer. Beer or spirit drinkers were at greater risk of developing MS than wine drinkers. Also, people who drank more on the weekends (a.k.a. binge drinkers) had a greater risk than those that drank less that 5 drinks on the weekend. If you drank more than 7 drinks a week, your chances of developing high blood pressure rose by 19%, high triglycerides by 107% and high fasting glucose by 54%. On the bright side, heavy beer consumption did raise your HDL (good) cholesterol. Abdominal obesity didn't really change for the 7 down club.

The researchers noticed a trend with beer and spirit drinkers. Beer and spirits were associated with after-hours binges. It was also noted that the highest alcohol drinkers were more likely to be men, older, more physically active, smoke more and drink more sugar-sweetened soft beverages. Dang! This sounds like me, except for the smoking part.

So what does this mean for craft beer drinkers? The first is don't drink beer in Spain. Next is to keep consumption in moderation and don't go crazy on the weekends. For that safety of everyone, please keep your shirt on.