This year was a great one for Victoria's craft beer lovers. Every major brewery released a few seasonal bombers. Moon Under Water changed hands. Hoyne celebrated its first birthday. 2012 was also the year that growler fills started to gain more traction. So which brews did the beer prick feel made top marks? It was a tough choice. 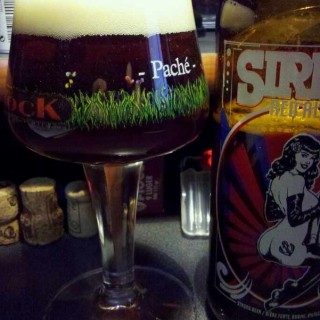 This brew gave every Victorian hophead what they really wanted for Christmas. There were massive citrus hops balanced with equally massive toasted, fruity malts. I have a feeling we will be seeing more of this beer in the future.

This under priced, barrel aged malt monster traveled more than I did last year. Usually consistent year to year.

Depending upon who you talk to, this IPA currently sits on the top of the BC IPA podium.

This is starting to sound like a broken record. Dean has been a busy brewer this year.

Everyone and their homebrewer released a white IPA this year, I felt this one stood out. Perhaps it was that spicy Weinhenstephan yeast.

For a prize winning homebrew that didn't really adhere to any style, it sure went far. Tasted dang good too.

A ramped up Keepers with a Belgian yeast strain, how can you go wrong?

8. Victorious Weizenbock by Moon Under Water = 9/10

Massive esters and fruitness were the game plan for one of Clay's first brews.

This was the best winter warmer in town. Rich fruitiness, biscuits, sherry and warmth were just the things one needed by the fireplace. It was the most elegantly packaged beer in Victoria.

Always a seasonal favourite. You know something is good when it sells out within days of its release.

Not everyone can be in the top ten.  In no particular order:

Black Swan Imperial Stout by Swan's
I never got around to reviewing this beer, which was a major oversight. It was delicious. Thick, fruity, chocolatey and slightly oaked. This is a great beer. Perhaps the best imperial stout in Victoria.

Beachcomber by VIB = 7/10
I have no idea how this beer did not win a gold medal. Looking forward to its return in spring.

Pandamonium by Phillips = 9/10
Outrageously hopped. That is all.

Baltic Porter by Spinnakers = 8/10
The lightly smoked malts was a nice touch.

Cygnet Ale = 5/10
Low alcohol beers tend to past by unnoticed. This one had major ester and fruity flavours for something at only 4.2%.

My wife and I were just talking about how amazing the beer culture is in Victoria.The amount of local brewers for a city of this size is unparallelled.
I have tried most of these beers but a few did manage to slip in under my radar. I look forward to hunting down the missing ones in the weeks to come.
The Thirsty Traveller

Kevin? You are correct, there are a disproportionate amount of great brewery for the size of this town. I have no problem with this. If there are any you want me to save for you let me know