This is the first, or maybe second, beer VIB has released since it sacked most of it's beer geek employees. Maybe the Bohemian Pilsner was first. Many of us in the beer geek community were worried about all those passionate beer drinkers displaced by this shake-up. No worries, most have found jobs in the local craft beer industry. The label of the Mile High reads ,"blahblah blah hop forward, Northwest-style blahblah blah dry-hopped aroma... blahblah blah sessionable ale." Marketing certainly hit all the popular key words that resonate with craft beer. Sadly this beer did not live up to any of these claims, except for the Northwest part. I could neither taste, not smell any forward hops and sessionable is below 5%. Is there a false advertising law that applies to craft beer?

Mile High is beer; that is all. It is a reasonably well crafted beer. I thought it tasted like a slightly maltier Piper's. The nose was a pleasant mix of bread crusts and raisins. A high carbonation sip delivered a medium to full body that was slightly cooling. Each sip added nothing new: slightly fruity, raisins, dark grapes, prunes and a vague hop bitterness. It finished relatively clean with an earthy lager character. Once it warmed up though, there was a bit of the D-bomb approaching. Certainly a very calm beer that will appeal to the masses. Not another Sabotage brew that pushed VIBs beer reputation higher.

Taste +2
Aftertaste +1
Alcohol Content +0 5.9%
Value +1 (it's not bad, just not exciting)
Appearance -1 (label looks like it was made an unemployed cartoon artist and the description was no way close to the taste)

Glassware: Any clean pint glass will do. Yes, you Brian.

I am sooo far behind in my beer reviews. I am not even close to choosing my top ten beers of 2012! It will be a long few weeks; please don't let there be any more Victoria beer releases. Enough self-indulgent first world problems. This beer was Phillips Breweries choice of beer to brew from the winners at the CAMRA 2012 homebrew contest. Eric won first place in the American Ales category. Quite the honour; but how does it taste? 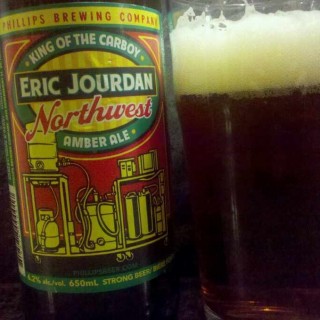 If I judged this beer at that BCJP contest, it would not score high. Ambers are not usually this hoppy. But for enjoyment and drinkability; it scores top marks. It delivers everything a hophead wants: juicy citrus, floral, hints of pine and an abundance of caramel malts. Each sip was full and creamy, yet satisfyingly astringent. The NW amber ale was hop forward with a massive mixture citrus hop punch, backed up with creamy and toasted bready malts. A long, smooth finish left a sweet citrus astringency. 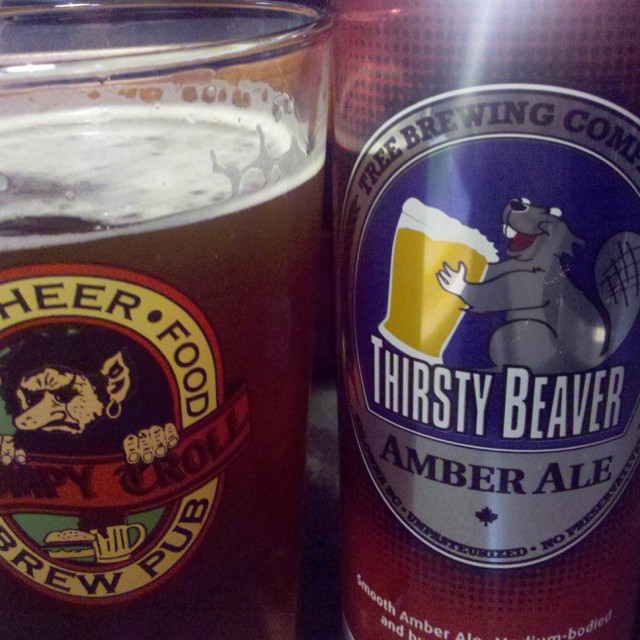 I admit it; this was an impulse buy. Rarely do I succumb to point of purchase marketing hijinks. How bad could a $2 can of beer be? Recently more money left my hands to purchase sugar water in a phallic shaped bottle.

Yup, it's an amber ale alright. The vague nose of buttered toast, caramel cubes is there. Each sip is mediocre with caramel malts, faint citrus and luckily low vegetal. Every creamy sip goes down real easy. For a $2 tall boy can, I was impressed. Sure better than those Holsten offerings.

I have to cull some of the beer in my fridge. There will be many more new arrivals after I return from the Oregon brewers festival next week. Must make room for more. In case anyone is wondering, this was left in the fridge by my father. If has been a really long time since I ripped apart a beer, so sorry Mr Keith, your time is up.

Beer Advocate B- (are you serious?)

The nose is just stale roasted peanuts, maybe a bit of waxy chocolate and cheap canned fruit salad. There is too much fizz and slickness in the mouthfeel to be pleasant. It just coats everything and will not scrub off. If you have tasted one Keiths beer you have tasted them all. This swill has a touch of caramel with gas station pecans and stale dried fruits. Most of the bottle was poured out. At least it didn't smell like vomit. I am trying to find something nice to say about this beer; wait I found something. It is union made.

No preample. It's Rogue, it's dry hopped, yum!


Oddly faint on the nose, but the roasted/caramel malts with citrus and floral hops foreshadow greatness. Up front it was very hop assertive: loads of spicy citrus, piney and quite dry. This hop blast fades to reveal a roasted caramel malt base. At the end a long bitter astringency lets you know PNW hops were here. A hop head must, but not stellar.

I wanted to try this beer because it won some award. The splash on the company website reminded me that it was the 2009 Canadian Beer of the Year.

The nose gives a good first impression with sweet toffee but no hops. A slight cherry and fruitiness is the first sensation one notices. The next is toffee followed closely by a slight alcohol warmth. At the end there was a citrus/herbal/floral hop ting that just faded quickly away. The picture does justice to the dark brown and ruby pour with a meringue head.

The ending was juicy with toffee malts, fruit and minimal hops.

Oddly you could taste and feel the warmth

I can see why this beer was award winning. There was a lot of flavours packed into this small bottle.

I think this beer was enjoyed in Gord's basement. He was probably playing guitar and I was drinking all his beer. It was a perfect evening.

If you are looking for a amber ale that is not ashamed of challenging your taste buds, then this brew is for you. It is big toffee malty, fruity with a snap of hops at the end.

Not listed on Ratebeer nor Beer Advocate

I guess to break into the bottom corner of BC beer scene you need a new angle. The Stanley Park Brewery claims to be sustainably brewed with a wind turbine that generates power for their state of the art brewery. Their labels are printed with vegetable based inks. Call me a pessimist, but the only wind turbine I have seen is on top a Grouse Mountain. It is currently not spinning (December 31,2009).

This is labeled as a 'Belgian Style Amber'. I sampled the one on tap at Vista 18 and in a bottle at Gordo's house. The aroma is a little funky and faint. It is slightly nutty, caramel with fermented acidic fruits (aka vomit). The sip is a lot better with a silky pecan malt and floral hops. It certainly is an amber, but at least it is above average.

The nutty malts leave a velvet coating on your tongue.

It is nice but not worth a repeat purchase. If you wanted to bring a tasty beer for a party; this would be a very good choice. It was the best thing on tap at Vista 18, but the competition was pretty week.

This was the last beer on the old fart pub crawl. We were home by 11pm.

It was good, above average beer. If your ecological guilt prevents you from drinking beer made in Europe, this selection might help. The label does not mention where their materials came from. Did the hops come from Europe, malts from France? At least the 6-pack case was made from recycled paper. Good luck. The beer was good.

Green produces gluten free beers for the pure at heart and intestine. This brew is also free-lots of other stuff. A great option for those with dietary sensitivities.

I'm sorry but I disagree with the masses, this is a decent brew. Note I said brew and not beer. The brew is cloudy like dishwater with slight scents of rice and vineous stuff. The taste was similar to rice pudding/sake and rich pancakes. This slightly sweet and quite carbonated brew also contained a lot of green apple tartness.

It left a mild green apple and vinegar like residue.

It was interesting but not worth a repeat.

Still staying the course with L4D2. I can see why people get sucked into one gaming franchise.

This is a great option for people with celiac disease that can't tolerate glutens from wheat and barley. For the rest of us, it might not taste that good.

Greens Endeavor
Posted by Unknown at 10:02 PM No comments:

This was an extremely uneventful honey brown swill. If I had to mark down a nose it would be honey and caramel. At least it was not too watery, tasteless is different from watery. Vague murmurs of caramel malt with honey and nuts, followed quickly thereafter by a nice, nonaromatic hoppy bite.
Aftertaste +1

A little bitterness mixed in with the honey sweet. Thankfully it was clean and short.

Maybe if I was on a deserted island...

If there is nothing else to drink or you want to buy a beer for someone you do not want to offend. It won't impress them either.
Posted by Unknown at 4:50 PM No comments:

This seems to be standard beer in every pub in Victoria. I had this at the Penny Farthings and gave it quite a low review. There was one in my fridge, so I gave it another try. The score only slightly improved

There were mildly, roasty and nut flavours to this malt forward beer. The nose in the pub consisted of fermented fruit (aka vomit). At home you could notice caramel and roast in the nose, but still very sweet. The colour is a striking dark copper colour, one might have expected more flavour. There was also the bareness of fruit flavours, it seems a littel watery.

There was a vague hoppy ting at the end; it sure didn't last long. Your mouth was left with a flavourless milky feeling.

At the pub I gave it a -1 and almost sent it back. It tasted OK at home, but I would not buy it.

Still at the Penny Farthing. I know I have sampled quite a few beers, but they were all glasses and my buddy drove me home.

It is beer. I would rather get this breweries Keepers Stout; a very good dry stout.
Posted by Unknown at 9:43 PM No comments:

Nose is a little flat; pecans, mixed nuts and vanilla malt. Taste is just like the nose; light roasted malt with vanilla and cloves. There is nice balance with a understated hop bitterness. The mouthfeel has a creaminess about it.

After the malt fades off, the hop bitterness coats the upper palate but does not overpower.

This came in the variety pack; $22 for 24 bottles from Costco. This was a great deal for the quality of beer.

Nope, sat in hot tub and drank the day away.
Overall 3/10

I'm usually not a fan of this style, but I liked it.
Posted by Unknown at 9:10 PM No comments: