This is a treat for Victoria's beer geeks, La Trappe Quadrupel is coming to town. The Belgian Quad/Abt style ale is not actually a recognized style of beer. For those keeping track, the lighter quadrupels are lumped under Belgian Specialty Ale (16E) along with most of the Unibroue beers. While the darker Abt (Abbott) is placed in the Belgian Dark Strong Ale (18E) category. Other notable Abt styles include the Rochefort 10, Westy 12 and Chimay Blue. The name designation 'quad' refers to the fact that these beers are stronger than Belgian triples. As the nomenclature denotes, this a formidable beverage.

La Trappe is brewed by Dutch Trappist brewery Koningshoeven. The most popular bottles available  from this brewery are the Quad and the infamous tripel. It might surprise you that this is the most prolific Trappist brewery. They brew almost 10 different beers; my favourite was their bock.

This beer pours with a daunting fluffy head and spicy alcohol nose. Further aroma complexities includes oranges, peaches and that chacteristic Belgian yeast. Each creamy, warming sip delivers a linear taste. It is all ripe pit fruits such as peaches, pears, pale prunes and almonds. There is a slight earthy and spicy hop ending tempered with orange syrup.

Glassware: It must be a chalice. All Trappist/Abbey ales need a wide brim to accommodate the massive fluffy head and mammoth aromatics.

Food pairings: Cheese: Blue cheese or anything wash rind. Pair with light, fattier meats such as wild birds, turkey and perhaps fatty fish with a light fruit sauce. Dessert options are almond tarts and marzipan. For the Vegan/Veggies out there, think white bean casserole with marjoram and easy on the sage. Personally, I would love to try this next to a Voodoo Doughnut Captain my Captain.

Cellar: Some of the booziness might fade to let the syrupy fruits come forward, but I wouldn't do it.

I got my bottle early. Liquor Plus will be getting a shipment of these in the near future. Thanks Rod for the advance bottle.
Posted by Unknown at 11:58 PM No comments:

It's a Trappist and a bock; I can think of nothing better.

"Hello" my name is nose, and I mean business! It's all vinous, alcohol and cherries aromas. Just as expected, the sip is straight off warming. Next comes the sweet, candy sugar, black pepper, chocolate, figs and caramel. Hops, what hops, this is all about the sweetness.

This limited release was sampled at the EPIC beer dinner #2. Yes it was a long time ago, but I'm catching up on my reviews. It is almost time to have another EPIC beer dinner.

The nose is all big trippel: all-spice, other spices, caramel and tart yeast. A malt forward taste unleashed all things fruity and spicy. Pick your fruit and its in there. The caramel mixed nicely with the plums, raisins, apricots, yeast and spices. Dry and spicy ending is the name of the game today. Alcohol warmth rounds out the entire experience

I still feel bad for chasing Brendan out of town. But this town was only big enough for one opinionated beer blogger, and my ego often swells to fill the room. As a treat after my Black IPA beer school, Lon from the Strath brought over a fresh bottle of La Trappe Tripel. This is the second Koningshoeven Trappist Ale you can get in Victoria; I have seen the quadrupel from time to time. Check out Cook Street Liquor for possible availability of the quad.
Anyways back to the tripel. Apparently it will be on tap at Clive's Classic Lounge later this year. Other great tripels include the elusive Chimay white, Westmalle and La Fin Du Monde.

Once you've tasted one tripel you have tasted them all; the difference is the execution. The nose is perfect: sweet with pit fruits, apricots, spicy yeast and grapenut cereal. A glorious and dry spiciness hits you first, then the malts are released. Sugared sultana raisins mix well with the slight caramel, yeast and bready malts. The ending is dry with peppery hops and spicy yeast leaving almost as much burn as the alcohol. It must be the yeast. You could unleash this yeast on barrel aged breast milk and make it taste good.

Thanks to Shawn for the great floor show. Where else in town can you get a bottle of beer sabred? 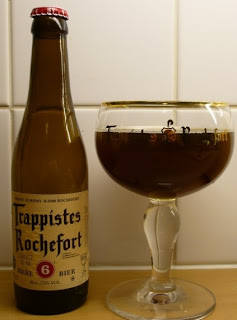 Any bottle that reads Rochefort is golden. This is the lightest of the Rochefort numbers and the nose reflects it. There are sweet fruits, rock candy and slight hints of cherries. Every sip delivers a creaminess composed of light nuts, pale fruits which is slightly dry. At the end you are graced with a snap of tartness like sultan raisins.
Aftertaste +1

A strong, light Belgian ale the way it should be; it was sweet, fruity with no yeast.

It is not often I argue with the awarding of a Nobel Peace Prize, but in this case I must. Over at Improbable Research, a group of Swiss researchers won a satirical IG Nobel Peace Prize for studying whether it is better to be hit over the head with an empty or full beer bottle. If they read the article in the April 2009 issue of the Journal of Forensic and Legal Medicine, it would be clear that this was good science. In this case the researchers set out to determine whether full or empty beer bottles are sturdier and if they can withstand the force required to fracture the human skull. It turns out that empty bottles are stronger than full bottles and both are capable of fracturing certain areas of the human skull. At events where fights might break out (weddings) beer bottles can be formidable weapons and their availability should be restricted. The researchers explained that full beer bottles break easier due to internal pressure from carbonation and that beer is an incompressible fluid. Any force to a full beer bottle can increase pressure within the bottle and aid in its destruction. In case you were wondering, they used one half litre Feldschlosschen Original (pale lager) for this experiment. It was not known if they drank the beer in order to obtain empty bottles.

I gotta start reviewing crappy beers, so that people don't think I like everythin

g. This bottle will never be broken over anyone's head.

Before the glass gets to my nose I know it will be good. The nose is earthy, with dried fruit (apricots), spices and bread. Every sip is sweet and dry but very good. The alcohol warmth carries the same nose flavours all the way down. The bottle looks familiar, but I just can't put my fat finger on it. Perhaps I am just a bit tired.

The alcohol provides a lot of warmth and kicks of a long residual coating of sweet apricots, yeast and grains. There is a delayed alcohol and yeast bite.

The taste is not noticed but the warmth is appreciated.
Value +1

Any Trappist Ale is a good ale.

Still sick with the H1N1. It really isn't so bad. Drinking too many of these, that would be bad.

Flavius: I watched "Saving Private Ryan" but found the movie quite unbelievable.
Meterman: Critics felt this movie truthfully portrayed the gritty horror that is war.
F: I found it hard to believe that frontline soldiers had perfectly white teeth like Tom Hanks and Matt Damon.

The nose was oddly faint, but there were little amounts of dark sugar, licorice and herbs. The taste is hard to describe, WOW. Alcohol creeps out of the glass and burns your palate clean; clearing the canvas. Then your taste buds are bombarded with all flavours dark and sweet: black currants, brown sugar, licorice, raisins and plums. There was a tequila like sweetness you could pick out. Every sip gave you a new flavour.

It was not really a coating, but a vapour trail of cassis and black berries.

I will always have fond memories of this beer.
Ingame Enhancement +1

This was the last beer of the Seattle session. A great ending to a great night of beer drinking.
Overall 10/10

This an outstanding and complex beer. If I could only drink one more beer, this would be it.

Rochefort 8 and the Stig
La Trappe
Orval
Posted by Unknown at 10:15 PM No comments:

In case you were wondering, Trappist beers are brewed within the walls of a Trappist abbey or under their control. There are currently seven trappist breweries (Orval, Chimay, Westveleteren, Rochefort, Westmalle, Mariawald and Achel). A similar style brewed by de Koningshoeven (La Trappe) cannot use the Trappist logo due to regulatory issues. Rochefort 10 is perhaps the greatest beer I have ever tasted, watch for an upcoming review.

The aroma is like none other: sweet lemon and lime, bready malt, and earth tones. The taste must be experienced in person, very Zen-like. To describe is to say bready, citrus, lemon, peachy and a hint of medicinal herbs. It is a very dry mouthfeel and every sip reveals something new.

After that complex onslaught; a tart, dry, spicy lemon takes hold of the tongue and does not let go.

Do I hear angels singing.

If I were stranded on a desert island...

If you like your Trappists a little dry, this is the one. The other Trappists are quite think and rich in fruity flavours.
Chimay Blue
La Trappe
Rochefort 8 and the Stig
Achel
Posted by Unknown at 10:51 PM 1 comment:

Rochefort Trappistes 8 and the Stig

Flavius: OMFG we have finally hit the big time. A review request by a TV star - The Stig!
Meterman: I don't think that nice guy from the shire is also the anonymous BBC Top Gear star.
F: He must be. I wonder if he will take me for a ride in an Audi R8?
M: I'm sure there will be a vehicle coming to take you away, perhaps a padded wagon?
F: Nice, what should I wear?
M: They will bring a tight fitting jacket with lots of buckles. Definitely a straight cut.

The nose is very ale like; there was only just the slightest hint of malt sweetness and pear/banana. The taste was something different; malt sweetness, fruit and pepper/cloves. At the front of the taste was a nice alcohol tingle with effervescent dark fruits. Don't get me wrong, this is a great beer. I felt the Chimay and Koningshoeven had a fuller body with more flavour.

The flavours quickly faded and left a nice alcohol bite/warmth with apricots. A dry finish.

Yup, its a strong Trappistes beer.

This was a good beer, but I would get a different style if was in the mood for a Trappist. I think it cost me about $6 for a 330ml bottle at the Cook Street CBAW.

This is a good beer. It was a little more spicy, but not as fruity and blander than the other Trappists.
Posted by Unknown at 4:18 PM No comments:

This is the only Trappist Ale produced in The Netherlands.

The nose is very sweet with raisins, dark cherries, malt and alcohol. The taste is all trappist style; effervescent alcohol backed with malt sweetness, plums, dark fruit and cherries. You can almost equate this to tasting a strong rum cake that has been put through a blender.

There is the strong alcohol presence balanced with the raisin/cassis sweetness.

Ouch, you can sure taste it. Oddly it does not seem out of place.

This was not cheap. I picked it up at the CBAW in Cook Street Village for about $8 for 230ish ml.

Molson, Nightware, Matrix and myself tried to finish the blood harvest map on expert. The key word here is "tried".
Overall 8/10 BOOM ZOMBIESHOT

If you like strong Trappist Ales, this one will not disappoint.
Posted by Unknown at 4:27 PM No comments: